DOF Technology uses many terms that are derived from Object Oriented Programming and some that are used, primarily, in reference only to The Technology. Understanding how we use these terms, in relation to our Technology, simplifies the learning process. We provide this Glossary to help you gain a better understanding as you learn.

An Object Access Library (OAL) written in a specific programming language that is used to access data which meets the standards of DOF technology.

An object identifier (OID) is used to define anything in that needs a unique identifier. OIDs must be globally unique. Note that although each DOF object requires an OID, OIDs can be used to identify other programming objects in addition to DOF objects.

A physical or logical networking device that communicates with other nodes. In OpenDOF, a node can be a provider, requestor, or proxy.

A provider is a node on a DOF network that provides functionality defined in one or more DOF interfaces.

A requestor is a node on a DOF network that requests functionality from a provider.

In DOF topology, a proxy is a node that acts as intermediary between two endpoints (a requestor and a provider). These endpoints desire to communicate, often across different networks. The proxy is capable of routing operations between the endpoints without being “visible” to either. 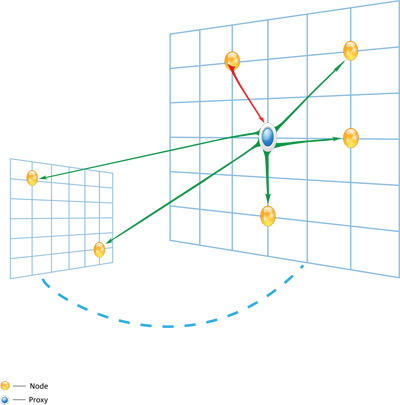 Example of a Proxy node communicating across two networks.

The combination of an OID and an IID that identifies a provider on the network as well as the functionality it is providing. These are also referred to as Binding Permissions.

An interface method is a function that the requestor can call remotely through an “invoke” operation and that the provider executes in a prescribed fashion (as defined by the interface). As with all functions, they may have input parameters and return types.

An interface event is a circumstance that triggers a response. Requestors can use register operations to be notified when the circumstances have occurred on the provider. Events may have output parameters.

Although the DOF API defines a number of different types of exceptions, the interface itself will define exceptions when any of its properties, methods, or events have logical exception cases. Exceptions defined in an interface are called provider exceptions in the API and are represented by the DOFProviderException class.

An error exception is an exception in the API generated by the internal library. 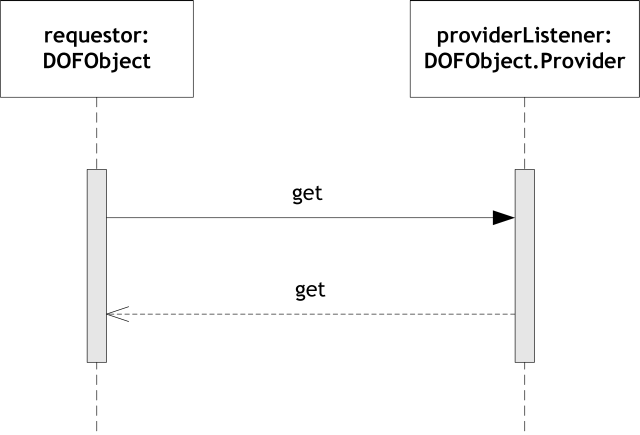 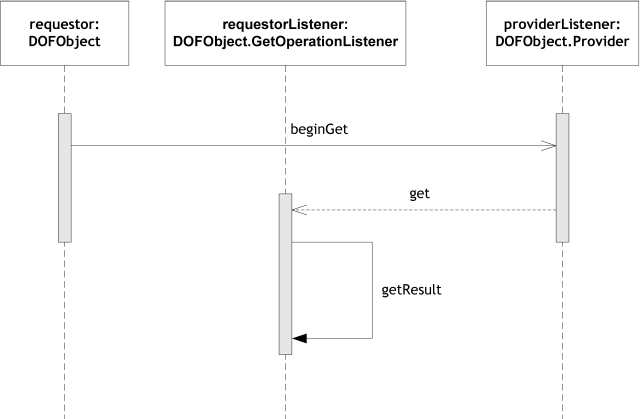 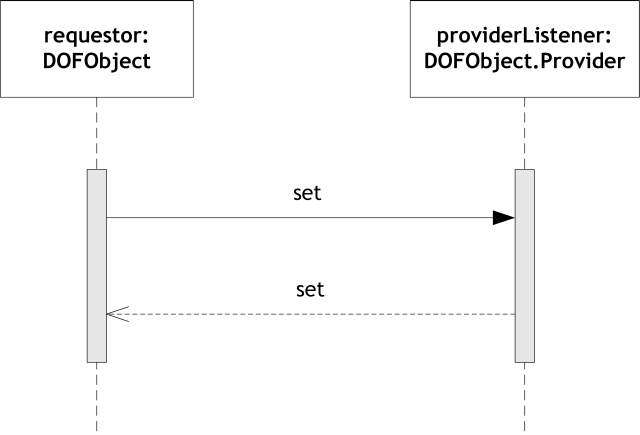 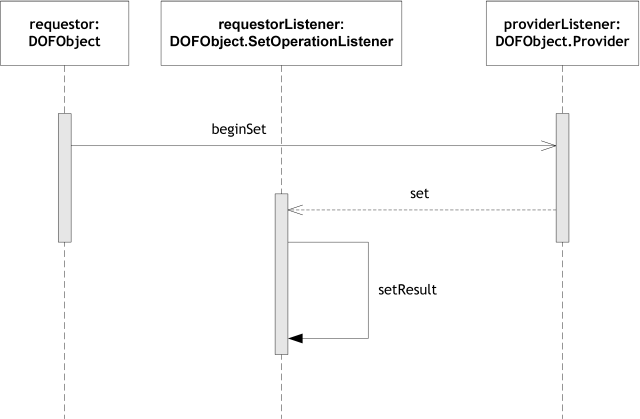 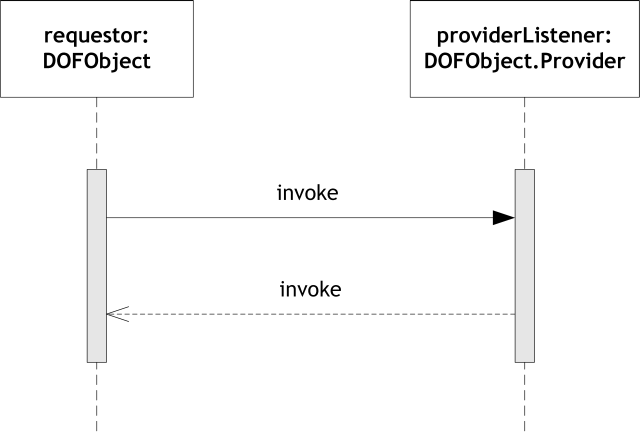 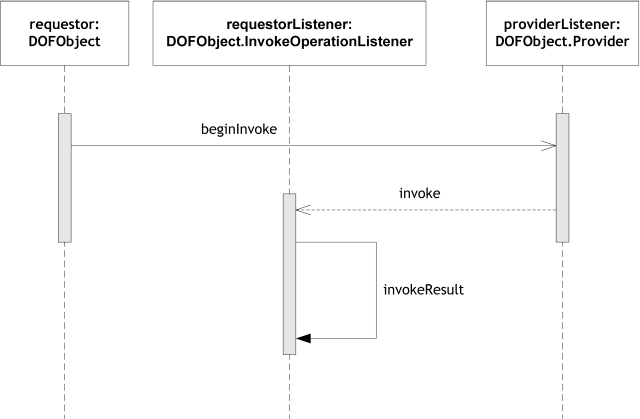 In a “subscribe” operation, a requestor subscribes to the value of a provider’s interface property, and the provider notifies the requestor each time the value changes. Subscribe operations are always asynchronous and require interest. 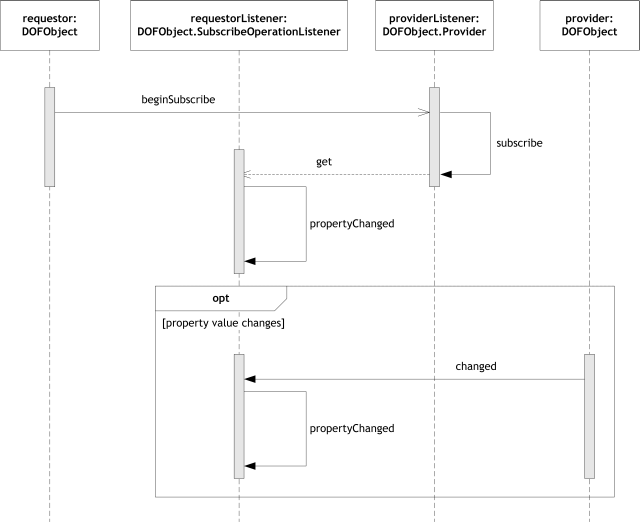 A register operation is initiated by the requestor to recieve notifications when an event is triggered.

In a “register” operation, a requestor registers for an interface event, and the provider notifies the requestor when circumstances trigger the event. Register operations are always asynchronous and require interest. 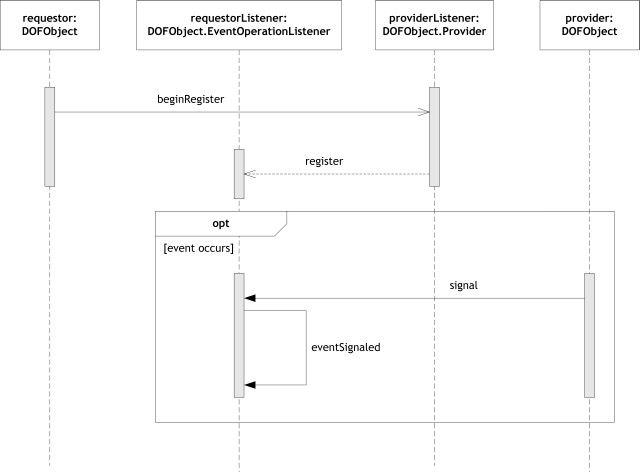 In an “interest” operation, a requestor broadcasts its interest in nodes with specific bindings. The requestor receives corresponding provide operations in response, which establishes a route between the requestor and matching providers. Interest is broadcast to all nodes on the network and stored in state until it is canceled. The requestor must specify an interest level: WATCH, ACTIVATE, or CONNECT. Interest is rebroadcast by the library once per hour.

An “advertise” operation is useful for a provider to initiate at startup. It finds all interest that matches an interface that the provider is capable of providing. This helps a provider that has just come online to find interested requestors before the interest is rebroadcast.

In a watch-level interest operation, a requestor finds only providers that have already performed a provide operation. It also causes direct routes to be set up between providers and interested requestors.

An activate-level interest operation causes providers capable of providing an interface to perform a provide operation in response.

A database used to authenticate the credentials of users, services, devices, applications, etc. In the case of DOF Technology and operations in the Cloud, an AS can centralize security information, creating a shared trust environment without exposing credentials.

Utilizing OpenDOF, a service is an application that provides functionality over the network that is intended to always be available. A service will maintain a persistent connection to its IoT Platform and will automatically reconnect if that connection is lost.

Permissions determine the operations that a provider or requestor can perform.

The binding permission controls the types of operations (defined by the interface) that a node can perform. Actions are added to this permission to control each operation. These actions are as follows:

The ActAsAny permission allows a proxy node to forward operations for other nodes. This permission is instantiated by calling its constructor, DOFPermission.ActAsAny.